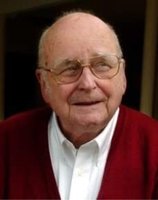 James Gerald (Jerry) Quigg, formerly of Rock Falls, passed away October 16, 2020, at Davenport Lutheran Home in Davenport, IA. A Celebration of his life will be held at a later date. Instead of flowers or plants, memorials may be directed to Stronghold Camp and Retreat Center of Oregon IL or First Presbyterian Church of Sterling, IL. He was born March 7, 1932 in Davenport, IA to Benjamin and Dorothy Quigg. He graduated from St. Ambrose in Davenport and served in the US Navy. Jerry met and married the love of his life, Elissa Y. Montgomery Quigg, married 65 years, until her death in March of 2020. They raised four children, Lori (Rusty) Edwards, Marietta Georgia, Julie (Eugene) Schocker, New Liberty, IA, Jennifer Lopez, Rock Falls, IL and Jim (Dawn) Quigg, Pinon Hills, CA. Jerry was a Field Agent for St. Paul Fire & Marine. He earned his CPCU designation in 1967. He was an agent at the Peterson, Detweiler, Book, Quigg and Imboden Independent Insurance Agency from 1976 until his retirement. Jerry and Elissa not only raised their children with joy, they also enjoyed all their 10 grandchildren and 10 great grandchildren. They left us with an appreciation for the value of cramming four children in the back of a station wagon for great summer adventures, community service, love of big band music, the Cubs, and of course, cowboy tall tales and the poetry of James Whitcomb Riley. Both Jerry and Elissa had a lot of wonderfully good care from Tammy Gettemy, In Home Care and Gaffey Services in Rock Falls. The Family also thanks Davenport Lutheran Home and Genesis Hospice for their tender care of Dad.