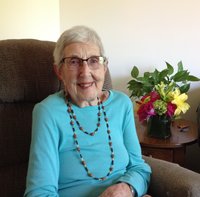 STERLING- Lois J. (Smith) Steiner, 99, died peacefully on Monday, November 9, 2020 at Rock River Hospice and Home in Sterling, Illinois. Lois was born on March 28, 1921 to Cloyd C. and O. Pearl (Messner) Smith in Stillman Valley, Illinois. She was a graduate of Stillman Valley High School. Lois attended Rockford College and graduated from Rockford Memorial Hospital School of Nursing, both in Rockford, Illinois. Lois served as a Lieutenant in the U.S. Army Nursing Corps during World War II. She was stationed in the Philippines and Hiroshima, Japan where her unit set up the first field hospital after the bombing. After the war, Lois moved to Sterling, Illinois where she was employed as a nurse at Community General Hospital in the OB department for over 40 years. On March 12, 1949, she married Harold D. Steiner in Chadwick, Illinois. After a few years Lois and Harold settled north of Sterling on Freeport Road where they farmed for over 50 years. Upon retirement, they spent 30 years traveling the country visiting family and friends. Harold proceeded Lois in death on February 19, 2019. Lois was continually active in her children’s lives; volunteering for 4-H, chaperoning school programs, attending sporting events, she carried this tradition on with her grandchildren and great-grandchildren. Lois loved to knit for her family and friends all receiving a special afghan made just for them. She was a diehard Chicago Cubs fan and attended the first night game at Wrigley Field on 8/8/88. She was elated when the Cubs won the World Series in 2016! Lois always wanted a tattoo and at the age of 91 had the symbol for “Kilroy was Here” from her days in WWII. She followed that with a big Heart surrounded by seven little hearts which represented her children. Lois spent the last 6 years residing at Parkway Center where she made many friends with the staff and residents and always considered them her extended family. Lois will always be remembered for her kindness and concern for others. Her friendships spanned four generations with all saying, “We love Grandma Lois”! She would be the first to tell you she had a wonderful life. Lois is survived by her sister, Nancy Shiley and her seven children: David (Sharlene), Ann (Gary), Jane Klein, John (Anne), Sue Linboom, Carl, and Jeff (Sylvia); nine grandchildren, and seven great-grandchildren. She was proceeded in death by her husband, her parents, and her brother, David Smith. At Lois’s request there will be no funeral services. A celebration of Lois and Harold’s life will be held later. Arrangements were completed by Schilling Funeral Home and Cremation in Sterling, Illinois. Condolences may be sent to www.schillingfuneralhome.com.