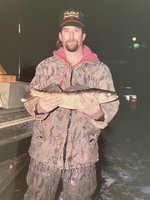 Thomas R. Ulve passed away December 31, 2020 at Community General Hospital from a long illness. He was born August 18, 1960 in Portsmouth, Virginia at the US Naval Hospital. He attended the Rock Falls grade schools and high school. He was an avid fisherman, hunter, and enjoyed watching Nascar races. He worked several years at the Steel Mill and Lawrence Brothers. He is survived by one son, Thomas E. Ulve; his mother, Patricia Cisketti Ulve; one brother, Timothy Paul Ulve; four grandchildren, Tyler, Addison, Hailey, Jade and nephew, Justin Ulve Ludwig. He is preceded in death by his father, Jerry R. Ulve of December 2019; his maternal grandparents, Ambrose and Martha Cisketti; paternal grandparents, Emil S. Ulve and Mildred Finkbone Ulve Austin. There will be no services at this time. Cremation rites have been accorded. A memorial has been established. Memorials may be sent to Schilling Funeral Home PO Box 592 Sterling, IL 61081 and will be forwarded to the family. Condolences may be sent to www.schillingfuneralhome.com.