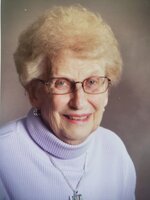 STERLING-Estella Metcalfe, age 92, of Sterling died Sept. 23, 2021 in Sterling, where she lived since 1957. She was born Dec. 26, 1928, in Canton, Illinois, the daughter of Zella (Fullmer) and Carroll Schnell. She graduated from her hometown Canton High School in 1946 and from Illinois State University in 1950. She married Richard C. Metcalfe in Canton in September 1948. Her husband preceded her in death on April 23, 2004. She taught at Lee Center (Ill.) High School from 1950-57 and at Challand Junior High School in Sterling from 1957 until retirement in 1989. After retirement, she served as a field representative recruiting schools to participate in the Illinois History program sponsored by the Illinois State Historical Society. She was a charter member of the Sterling-Rock Falls Historical Society and interested in preservation of historic homes and buildings. She spearheaded a survey of pre-1950 buildings and homes significant to Sterling and Rock Falls. She served as a volunteer at CGH Medical Center in Sterling, Sterling Historical Society Museum and Sterling Public Library and organized school tours of the Lincoln-Manahan Home Museum in Sterling. She was a member of the First Congregational Church of Sterling. Survivors include two sons, Jeff (Laura) Metcalfe of Mesa, Arizona, and David (Carol) Metcalfe of Decatur, Illinois, and two grandsons, Andrew (Megan) Tronick and Brennan Metcalfe. She was preceded in death by two sisters, Kathryn Rafferty and Bernice Nelson; two brothers, Frederick Schnell and Morrow Schnell; and her daughter, Carole (Metcalfe) Tronick. A memorial service for family and friends will be held at 1:30 p.m. Oct. 29 at Schilling Funeral Home in Sterling. Memorial contributions to the Sterling Schools Foundation or Sterling-Rock Falls Historical Society would be appreciated. Online condolences may be sent to www.schillingfuneralhom.com.