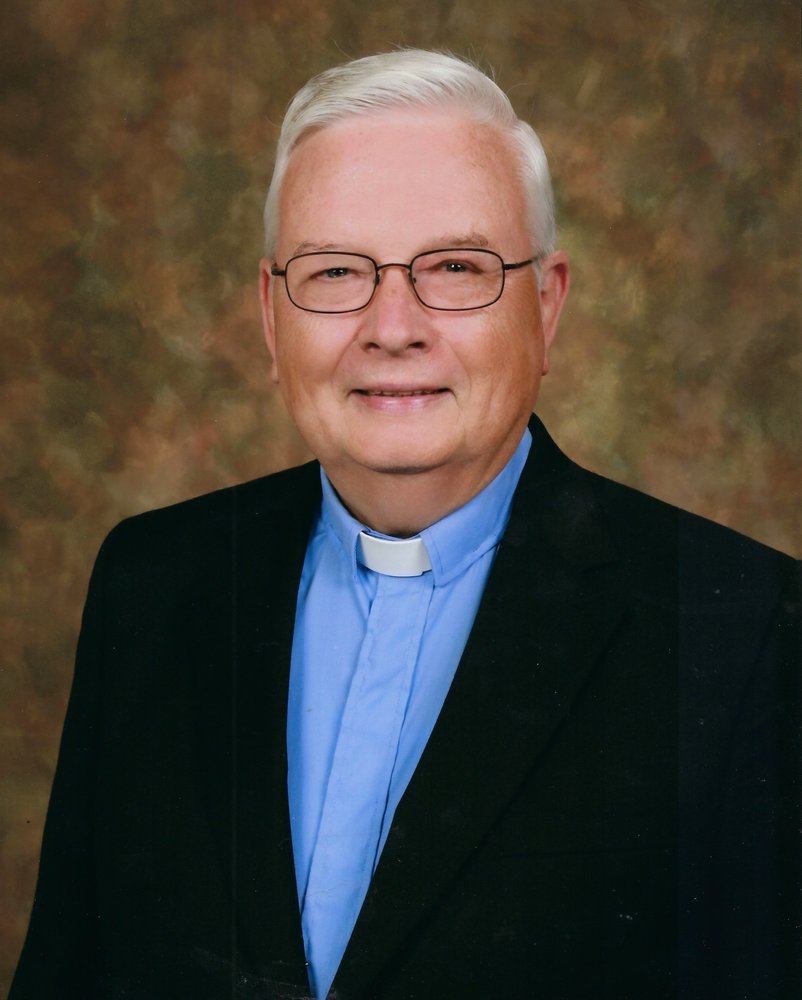 The Reverend Charles Eugene Steinke was welcomed into his Heavenly Father’s House on Tuesday, November 19, 2019, with a greeting: “Well done, good and faithful servant”. Pastor Steinke was born October 16, 1939 in Woodstock, Illinois to Carl Eugene Steinke and Helen Elizabeth Mann Steinke (later Menzel). His very early years were spent helping his father on the family dairy farm north of Woodstock and his middle and late childhood years were spent in Richmond, Illinois. He graduated from Richmond-Burton High School in 1957 and began his undergraduate college education at St. Olaf College in Northfield, MN. He transferred to Northern Illinois University and obtained his undergraduate degree in 1963. Along the way, he taught 5th grade elementary school in Genoa, IL and met the love of his life, Betty Louise Garrison. They were united in marriage August 10, 1963. She was his faithful partner and supporter, and remained at his side the rest of his life. His devotion to her was first and foremost.

With Betty’s encouragement and hearing God’s call, Pastor Steinke attended Central Lutheran Theological Seminary in Fremont, NE (merged to become part of LSTC in Chicago, IL), interned at St. John’s Lutheran Church, Joliet, IL and was ordained into the Lutheran ministry in Rockford, IL in May of 1968. His life in ministry took him to several LCA/ELCA churches. His first call was to Trinity Lutheran Church in Golden, IL from 1968 – 1973. He was then called to a missional congregation at Christus Victor Lutheran Church in Elk Grove Village, IL from 1973 – 1975. He then served Trinity Lutheran Church in Harvard, IL from 1975 – 1984, St. John’s Lutheran Church in Sterling, IL from 1984 – 1992, St. Paul Lutheran Church in Peoria, IL from 1992 – 1995, and Salem Lutheran Church in Sycamore, IL from 1995 – 1998. It was his honor to serve on staff of the Rockford Bishop’s Office of the Northern Illinois Synod of the ELCA from 1998 until his “retirement” in 2004. Following “retirement”, he traveled to churches all over the country as a facilitator/consultant for the Stewardship Key Leader program of the ELCA, helping churches raise money for capital growth campaigns. In subsequent years, he continued to work as an interim pastor at Trinity Lutheran Church in Mt. Morris, Illinois, First Lutheran Church in Chadwick, IL, and provided supply preaching at many of the Lutheran churches in the area. He felt the call all of his life, as he preached his last sermon this past Labor Day Sunday and continued reflecting on future sermons even after he became ill. His life’s work was doing God’s work: spreading the Good News, growing the Faith, living and teaching a life full of grace, love, and mercy. He had a deep passion for the church, and love for God’s people. The friends from each of his calls remain highly treasured by both he and Betty.

Charles (Chuck) Steinke was an avid reader, enormous CUBS fan, and Farmall tractor collector. He also loved his drives in the country where he stopped to visit and photograph horses in the field and trees in the countryside.

To celebrate Pastor Steinke’s life is to continue the work to which he committed his life. In lieu of flowers, donations may be sent to the Pastor Charles Steinke Seminary Scholarship Fund c/o St. John’s Lutheran Church in Sterling.