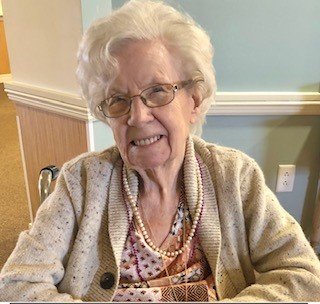 Dorabelle (Dode) McClanahan Swanlund, peacefully left this earth to be with loved ones in heaven on Friday May 15, 2020 at Rock River Hospice and Home. She was born April 30, 1918 in Dixon, the daughter of Iva (Helfrich, Williams) Hutchins & LeRoy Williams. She was married to John Raymond McClanahan August 8, 1940 in Dixon. He preceded her in death March 30, 1977. She was later married to Clifford Swanlund March 23, 2002, who also preceded her in death. She was preceded in death by her parents and also three brothers; Albert, Henry, and Robert Williams and four sisters; Ruth Kested, Shirley Sonneberg, Mary Lou Wentling and Avis Wetter. Dode and John, her husband were co-owners with Harold & Caroline Bay and worked at the former Chicago Avenue Grocery Store in Dixon, IL. She also was a bookkeeper at Hal Roberts Co. She worked at Wyanet Meats in Dixon until 2002. She was known for her “Dode’s ham salad.” Also enjoyed working with her grandson Kendall Wallingford III at Wyanets, She was a member of St. Paul Lutheran Church in Dixon. Her faith in God was a very important part of her life, which she also instilled in her family. In the earlier years, Dode loved listening to music and dancing with her husband, Johnny. Saturday nights were known for watching Lawrence Welk and eating Ginos pizzas. Dode enjoyed her “circle the word” books, playing cards and chocolates. She always looked forward to going to the riverboat and playing the “Diamond Deluxe” slot machine. She enjoyed bird watching on the front porch, when weather permitted, otherwise would go inside and watch Family Feud. Her grandchildren and great-grandchildren were very special to her. Quoted by her grandchildren: Memories were made with Grandma year-round and some are worth sharing. Grandma loved being with family and we loved being with her. Christmas Eve was a very memorable time at her house. We would make fondue, try our luck at our “guess me'' present and attend midnight church service. Grandma had a cookie jar filled with chocolate chip cookies from Oliver’s and a candy dish with milkful candies, always within reach. Hula hoop contests, walker races, to laughing at herself on Snapchat filters, the memories are many. Isn’t it something, was something she always said. Her grandson Kenny lived with her when working at Wyanet Meats. She always made sure he got his centrum vitamin and he was told to kill’em with kindness always. When he joined the USMC, Grandma Dode sent him a handmade pillowcase to sleep with at night to bring him comforts of home, which traveled the world with him, and he still cherishes today. Survivors include one daughter: Deb (Ken) Wallingford; two grandchildren: Roberta (Paz) Martinez & Kendall (Brandi) Wallingford III; and five great-grandchildren: Mariyah, Trinity, Mateo Martinez and Kaden and Drezden Wallingford. A memorial has been established to Rock River Hospice & Home 2706 Avenue E, Sterling, IL 61081 (www.hospicerockriver.org).There will be a private family funeral at Schilling Funeral Home in Sterling, with Pastor Scott Porter of Abiding Word, officiating. Graveside service will take place at Chapel Hill Memorial Gardens in Dixon.
Plant a Tree
Print
Share A Memory
Plant a Tree