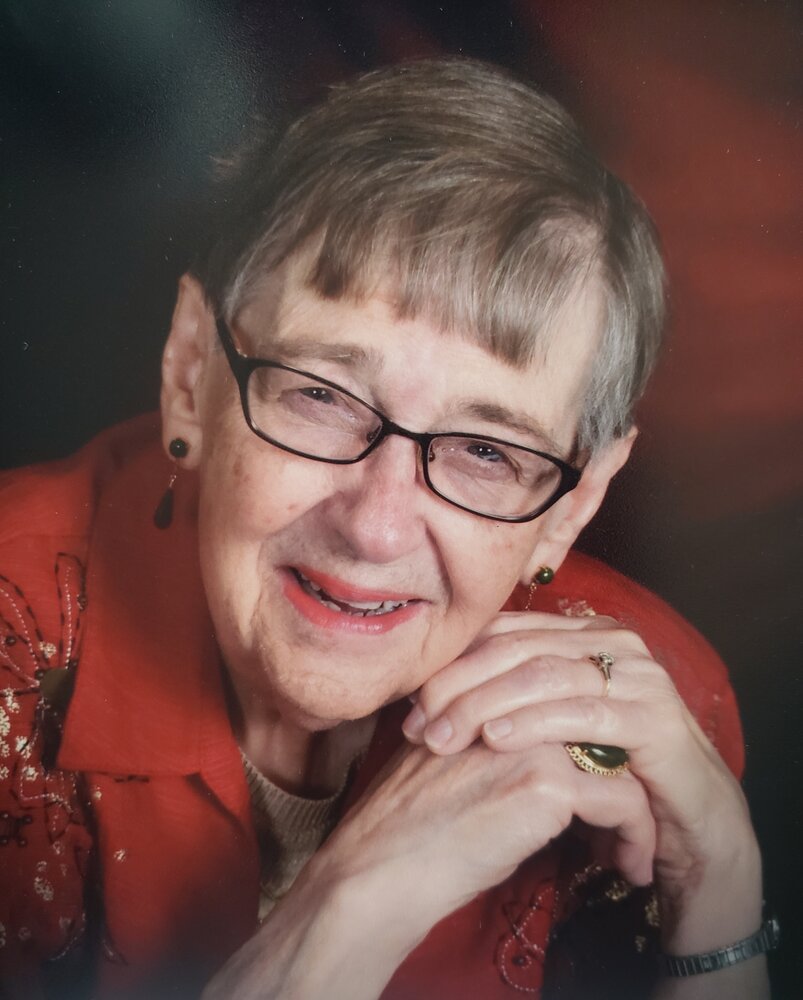 Please share a memory of Ruth to include in a keepsake book for family and friends.
View Tribute Book
Ruth A. George, 97, of Sterling passed away August 3, 2022 surrounded by family at Rock River Hospice & Home in Sterling. Ruth (Heilener) was born June 9, 1925 at the Sterling public hospital, the oldest daughter of Walter and Gesina (Edeus) Heilener. Ruth lived all her life in Emerson, until Paul and her sold their home in Emerson in 2006 and moved into a retirement home in Sterling. She was baptized in the East Genesee Lutheran Church the 26th of July 1925 by pastor Krebe. She attended the Emerson School, graduating in 1938, and from Sterling High School in 1942. Ruth began working in the safety department and later the personnel department at Northwestern Steel & Wire in August of 1942 and worked there except for 6 months when she was with her husband Paul at several of the Army camps he was stationed at. She retired in December of 1945 after her husband was discharged from the service. She married Paul K. George January 28, 1945 after his return from overseas in the Aleutian Islands near the end of WWII.He preceded her in death on May 13, 2010. Ruth was a member of the Whiteside County Genealogy Club since 1984, serving as secretary and later treasurer for most of those years following. Not only had she done research for many of her and Paul families, but was a collector of Emerson Memorabilia and the history of that area, and she gave several talks on these histories. Ruth gave talks to many organizations in the area on “The history of outhouses and the outhouses in her life.” She was a member of the Sterling-Rock Falls Historical society, serving several times on the board. She was a member of St. Paul Lutheran Church since her parents joined when she was 4 years old, and belonged to the Ladies Circles there down through the years. Ruth was Co-Chairman for the 100th anniversary celebration of St. Paul’s in 2007. She served as an election judge for Hopkins Township until moving to Sterling. Along with her husband Paul, was a member of the Outaga Campers Club for nearly 30 years, and also worked with him at the Good Neighbors office when it first opened. Survivors include three sons Alan George of Prophetstown, David George of Port Byron, and Mark George of Milledgeville; two daughters Susan Kuehl of Morrison, and Carolyn Reppe of Winfield IL; one brother Reverend Ray Heilener of Germantown TN; one sister Lorraine Knicl of Dixon; 14 Grandchildren, several great-grandchildren, and great-great grandchildren. She was also preceded in death by her parents; a daughter Marcia Rodekamp, one grandson Kevin Reppe; two nieces, two nephews, two daughter in-laws, and one son in-law. Memorial service will be 11AM Monday August 8, 2022 at St. Paul Lutheran Church in Sterling. Visitation will be one hour prior from 10AM-11AM at Church. Burial of cremains will immediately follow at Oak Knoll Memorial Park in Sterling. A memorial has been established. Condolences may be sent to www.schillingfuneralhome.com
Monday
8
August

Share Your Memory of
Ruth
Upload Your Memory View All Memories
Be the first to upload a memory!
Share A Memory
Send Flowers
Plant a Tree