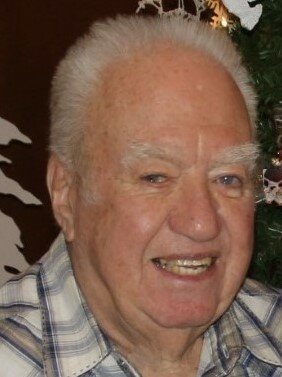 Please share a memory of Dick to include in a keepsake book for family and friends.
View Tribute Book

Richard “Dick” Cox passed away peacefully Thursday, November 3, 2022, at Rock River Hospice &  Home. He was born April 16, 1936, in Quincy, IL, the son of Harold and Hazel (Boers) Cox. Dick was a 1954 graduate of Sterling High School and attended Wartburg College where He met his future wife, Audrey Gerken. They were married December 28,1958, in St. Paul, MN. He served in the U.S. Army from 1958 to 1963. Dick started his career in the advertising department of The Daily Gazette and worked part-time at the Sterling Park District eventually becoming the Superintendent of Recreation. After leaving the Park District, Dick sold real estate at Arians Century 21 Realty and was named Whiteside County Realtor of the Year while working there. During retirement he worked at the Sauk Valley Food Bank.Dick loved to volunteer. We always said that his obituary should just say he did a lot because he did. Dick was a member of the Sterling Kiwanis Club for 46 years serving in many capacities including Lt. Governor of District 13. He was on the board at the Whiteside County Health Department and the American Red Cross where he also donated 37 gallons of blood. He was involved with the Sauk Valley Chamber, the CGH Health Foundation and was on the Selective Service Board. Dick was elected to the Whiteside County Board from 1998 - 2012. He was a member of the Sterling American Legion Post 296 serving as commander from 2012- 2014 and was a member of the honor guard. Dick refereed local high school football for 36 years and started track &amp; cross country meets for 52 years. As a result of all his volunteering, Dick is a Distinguished Alumni of SHS.

In his spare time Dick raised and showed miniature horses. He thoroughly enjoyed taking the Franklin School kindergarten class (that he read with) to see the horses each spring. Dick was a life-long member of St Paul Lutheran Church serving on the council, singing in the choir, and teaching Sunday School.

Survivors include his wife of 63 years Audrey, daughter Cathy of Rock Falls and son Rick of Monee, IL; granddaughter Alexa of St. Louis and grandson Greyson of Milwaukee; his brothers Don of Mesa AZ and Chuck (Marianne) of Scottsdale AZ; sister-in-law Tillie Adams of Sterling; and many nieces, nephews, and cousins. He was preceded in death by his parents, brother Bob, and sister-in-law Betty.

Cremation Rites have been accorded and a memorial service will be at 2:00 PM Saturday, November 12, 2022, at St Paul Lutheran Church in Sterling with Pastor Makayla Dahleen presiding. Visitation will take place at the church from 12:30 PM to 2:00 PM prior to the service.

A time of fellowship will follow the service. Burial will be at a later date.

Share Your Memory of
Dick
Upload Your Memory View All Memories
Be the first to upload a memory!
Share A Memory
Send Flowers
Plant a Tree