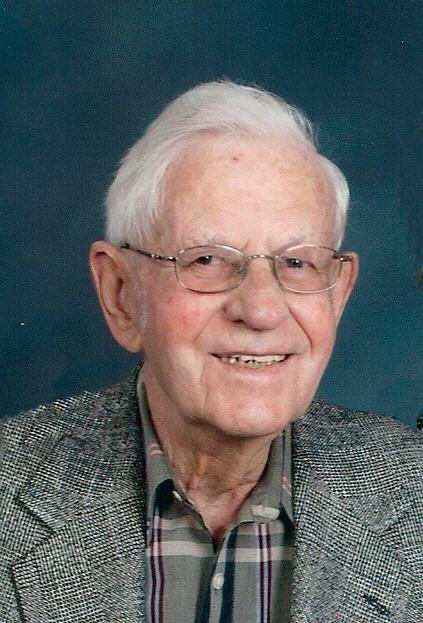 ROBERT W. JOHNSON STERLING - Robert W. Johnson, 96, died Thursday, July 1, 2010 at Sterling Pavilion. He was employed as a Superintendent in the plating department at Lawrence Brothers for 50 years. Robert was born September 18, 1913 in Erie, the son of Olaf and Ethel (Petrie) Johnson. He married Jeannette M. Meggers on January 11, 1936 in Sterling. She preceded him in death on October 21, 2009. Robert served in the Army during World War II. He was a member of St. John's Lutheran Church. He was also a volunteer Blue Boy at CGH Medical Center and a volunteer usher at the Sterling High School football games. Robert was a sports enthusiast and attended many Sterling High School basketball games and Iowa football games. Survivors include one daughter, Sharon (Henry) Steinhagen, of Sterling; three grandsons, Robert (Tara) Steinhagen, of Rock Falls, Bradley (Susan) Steinhagen, of Sterling, and Brian (Julie) Steinhagen, of Smyrna, TN; and four great-grandchildren, Madison and Hunter, of Rock Falls and Claire and Henry, of Sterling. He was also preceded in death by one sister, Kathryn Ebenezer. Services will be held at 10:00 AM, Saturday, July 3, 2010 at Schilling Funeral Home, Sterling, with Reverend Leo Patterson of St. John's Lutheran Church, officiating. Burial will be at the Oak Knoll Memorial Park. Visitation will be from 4-6 PM, Friday, July 2, 2010 at the Funeral Home. A memorial has been established to the St. John's Lutheran Church.
Print
Friday
2
July