The Differences Between Caskets and Coffins 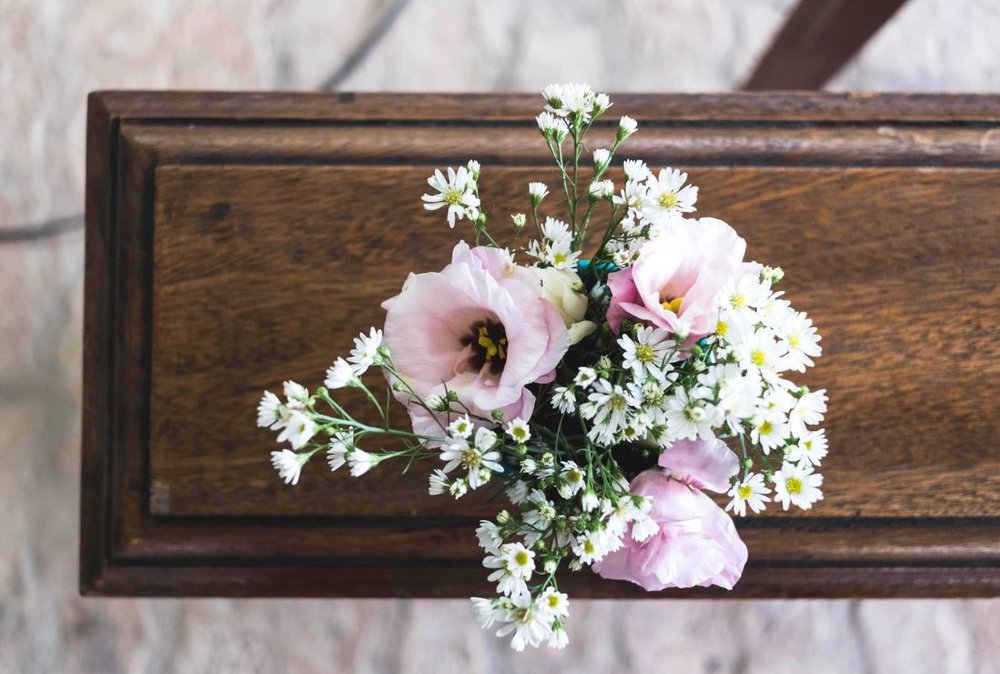 Coffins and caskets can be differentiated by a few different factors, but the main difference between coffins and caskets is their level of formality. In general, coffins are more economical than caskets which makes them ideal for burial in an existing gravesite or cremation.

Coffins don’t have to be made with solid wood like caskets and they can be made from many different materials depending on the material. Both coffins and caskets are burial containers used to hold the remains of a deceased person for a funeral, wake, visitation, and final disposition. In the United States, most people use the more modern casket, but the choice between the two is ultimately the families of the deceased depending on their preference.

Both coffins and caskets are burial containers used to hold the remains of a deceased person for a funeral, wake, visitation, and final disposition. In the United States, most people use the more modern casket, but the choice between the two is ultimately the families of the deceased depending on the final. The main differences begin in the details. 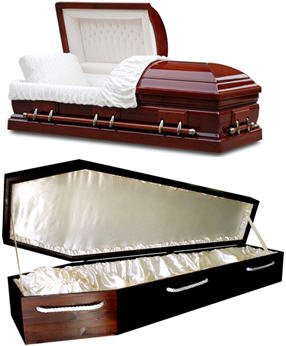 If you’ve watched a movie or a TV show, you’ve probably heard the term “coffin.” But what is a coffin? What is a casket? Are there any differences between the two? If you’re asking these questions, you’re not alone. Many people researching funeral homes in Sterling, IL want to know the differences, if any, between caskets and coffins.

What is a casket?

The casket is a box made especially for the body and is usually used during funeral services. You can find them in many different shapes, sizes, colors, materials such as wood or metal like copper or bronze that will show your loved one's individuality while they are laid to rest with dignity.

A casket is a special box made to hold the remains of a deceased person. These boxes are made in rectangular shapes with four sides and hinged lids. Caskets also usually have handles that make them easier to live and move and can be used for both cremations and burials depending on the material. 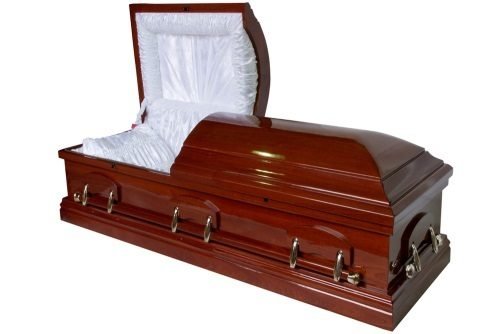 Caskets can be made from a variety of materials, but the two most common are wood and metal. The average metal casket is made from stainless steel and the average wood from mahogany or oak. Most caskets are finished with soft interior linings to give the deceased a comfortable place to rest.

Coffins are a boxed container that holds the body of someone who has died. Coffins have been used since ancient times to carry and protect bodies for funerals in different cultures all around the world, as well as provide an appropriate receptacle for viewing or keeping corpses before their final burial or cremation.

Coffins are tapered at the head and foot while being wide in the shoulders, whereas a casket is rectangular with better quality timbers that have higher standards of workmanship for construction.

What is the difference between coffins and caskets?

So what is the difference between coffins and caskets? One of them tends to be tapered at the head, wide at the shoulders, while another one can either have a rectangular shape or resemble that specialty coffin. The former option may end up being more cost-effective than its other counterpart because it has better standards from when it was made.

A casket can be made of wood, metal, or fiberglass. It has four sides (or six if it's an expensive one), and typically includes handles on either side for carrying. Coffins have three sides with two pieces of material that fold over to create the fourth side. They often include hinges at each end so they can open more easily in order to put the body inside. Caskets usually cost more than coffins because they're prettier and fancier. 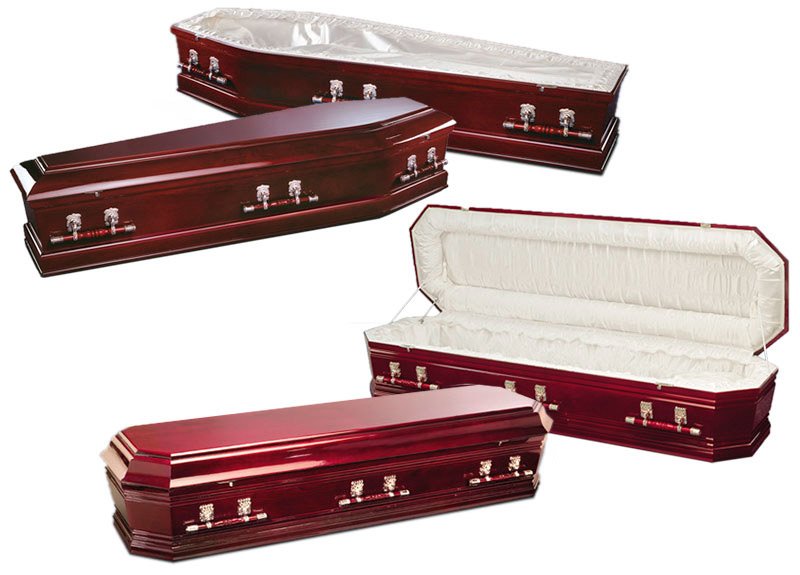 Unlike caskets, coffins have six sides and are wider on the top than on the bottom. This tapered design was chosen to match the shape of the body as the shoulders are wider than the feet. Coffins also do not have hinged lids. Instead, they have removable lids that must be fully lifted.

The vast majority of coffins are made out of wood and are also finished with cloth interior linings, but they do not have exterior handles for carrying. In fact, any additional decoration or handles are not considered part of the coffin but are instead called “coffin furniture.” Traditionally coffin furniture is used to display the deceased’s wealth or status.

The other big difference between caskets and coffins is price

Caskets are generally more expensive as they have more decoration and use more elaborate materials. Coffins, on the other hand, require less material as the tapered shape uses less wood and thus lowers the overall price.

At the end of the day, the differences between caskets and coffins don’t matter even though they are very similar.  All that matters is that you choose whatever is right for your lost loved one and your family. However, it is important to note that it may be hard to find a coffin manufacturer as they are not in style and not as popular.

Schilling Funeral Home & Cremation is a Sterling, IL funeral home. We can offer you additional information on caskets, coffins, and other funeral services to help you plan a service that will honor and remember your lost loved one. Call today to learn more about what we can do for you in your time of loss.

What is the difference between a coffin and a casket?

The main difference is that coffins are for burial while caskets are used at funerals. A casket can be made of wood, metal, or fiberglass. It has four sides (or six if it's an expensive one), and typically includes handles on either side for carrying. Coffins have three sides with two pieces of material that fold over to create the fourth side. They often include hinges at each end so they can open more easily in order to put the body inside. Caskets usually cost more than coffins because they're prettier and fancier, although there are some people who prefer not to spend any money on their funeral arrangements.

Coffins vs Caskets: Types of coffins in history

In ancient times coffins were simply burlap sacks that were thrown into an open pit grave after being filled with soil instead of using a coffin maker. The coffins took their name from this time when the coffin was spelled "coffyn." During the Renaissance, coffins were hand-carved from solid wood or even metal. coffins were reserved for wealthy families, while the coffins of poorer people would often be in the shape of a wooden box with an interior lining, which was then covered with fabric.

The traditional coffin is believed to have originated in ancient Egypt during 2500 B.C., though it may also have been used much earlier by the Minoans and possibly as early as 5000 B.C. The coffins at this time served to both preserve and protect the deceased’s remains and to provide transportation for their afterlife journey into the afterworld. Most coffins included amulets designed to help guide their owners into the next life.

The coffins of poorer people would often be in the shape of a wooden box with an interior lining, which was then covered with fabric. The coffins of royalty and wealthy individuals were more ornate; most included intricate carvings, although some coffins also contained solid gold. This tradition continued throughout ancient Egyptian history. They also came to play an important role in their religious practices as well. It has been theorized that when animals such as bulls and baboons were enclosed within coffins during mummification, it served as a symbol of religious devotion to the creatures depicted on them.

Today, coffins are still created using many of these traditional designs around the world in countries including China (where they are known as coffins), India, Brazil, and the United Kingdom. They are often given as gifts to family members and friends during new baby events or weddings in many cultures around the world, particularly in China, Africa, and Latin America.

Coffins are also known by different terms in different countries. They are called coffins in the United States, caskets in Canada, and coffretts or coffrets in France. Coffers can be found in Italy (where they’re referred to as a coperchio), and there’s even a word for them in Russia—kufon.  In Germany coffins are referred to as Sargs, while coffret is used during funeral services in Belgium and Luxembourg. Other names include:

Today coffins are available with many design variations to suit each family’s needs including those made from metal, teak wood, wickerwork, or bamboo–to name just a few examples.  They may be rectangular, square, or rounded (to resemble a traditional Chinese cypress coffer).

The primary difference between coffins and caskets is the size. A coffin is six feet long—from head to toe—and will hold an adult, whereas a casket is from 22 to 28 inches long and provides plenty of room for the legs.  Typically, coffins are used for children or infants as well as people that families can not fit into a full-sized casket. This may include very large adults or those with advanced age conditions. Coffins are also recognized by their removable lid which makes viewing possible prior to burial–in fact, coffins were originally designed for this specific purpose. On the other hand, caskets have a solid metal or wooden top which cannot be opened. Both coffins and caskets can be shaped like a rectangular box, urn, or rounded shape to reflect the deceased person’s personality.